Bacopa monnieri is an Indian aquatic her that has been used in Ayurvedic medicine for centuries.  Bacopa has traditionally been used in Ayruveda for enhancing brain function and focus.  In recent years with the rising popularity of nootropics to enhance cognitive performance, bacopa has been included in many formulas.  Whereas with certain nootropic ingredients their inclusion in formulas is only backed by anecdotal evidence or mouse studies, bacopa has centuries of usage in eastern medicine and hundreds of clinical trials backing its efficacy.

300 mg of B. monniera was given to test subjects and neuropsychological testing was conducted pre-(baseline) and at 5 and 12 weeks post administration.  Bacopa significantly improved the speed of visual information processing, learning rate, and memory consolidation with maximal effects evident after 12 weeks.[1]

A randomized double-blind controlled trial on 60 medical students was conducted to evaluate the efficacy of Bacopa on memory over the course of 6 weeks.    The participants were divided into either a placebo group or one that received 150 mg of standardized Bacopa extract.  Statistically, significant improvements were seen in tests related to cognitive function in the group that supplemented with bacopa.  Specifically, the measures for the efficiency of attention, freedom from distractibility, and working memory were all improved as was logical memory.[3] 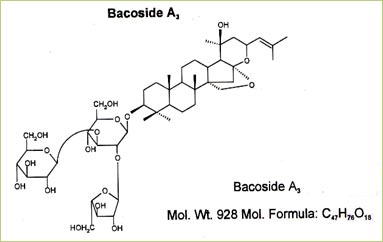 Bacopa is able to work across a few different pathways which enable it to exert its cognitive enhancing effects.  Bacopa can act as an anti-oxidant neuroprotector, it plays a role in the inhibition/activation of acetylcholinesterase and choline respectively, it can reduce beta-amyloids, increase cerebral blood flow, and it’s shown protective effects against aluminum-induced damage.  Bacosides, steroidal saponins that are found in the Bacopa plant are believed to be the active ingredients that promote these effects.

Dosages of Bacopa in studies have ranged from 150 mg to 300 mg daily.  A key component is the total bacoside compound of the supplement as this is the active ingredient.  As an example, a 300 mg Bacopa supplement standardized for say 25% bacosides would have 75 mg of the active ingredient whereas a 200 mg Bacopa supplement standardized for 50% bacosides would have 100 mg.  Another key point when dosing Bacopa is understanding that this supplement is a long game supplement, you won’t feel the effects immediately like with something like say caffeine.  While studies on bacopa have shown effects in some cases in as little as 4-6 weeks, most studies note differences after 8-12 weeks of supplementation.

One caveat about bacopa is that studies on male mice have shown Bacopa can have an anti-fertility effect by negatively affecting sperm count and function.[4]  Animal models of course only serve as a template and the dosages/effects often times lose their potency as you scale up in size in laboratory studies from animals to humans but this effect should be one to look out for, I couldn’t find human studies done on this Bacopa side effect.