Warnings about the dangers of inflammation have led to the development of various diets, supplements, and pharmaceutical drugs.  The most common approach to treating inflammation has been with various pharmaceuticals that inhibit inflammatory pathways. A successful example of this is Aspirin, in other instances unsuccessful ones like VIoxx have had serious side effects which is why this drug was taken off the market.  It’s important to know that there’s two types of inflammation.

Clinical Biomarkers of Inflammation can be used to track and measure levels of chronic inflammation.  These are some fairly popular biomarkers:

AA/EPA Ratio: AA is Arachidonic Acid a type of Omega 6 fatty acid and EPA is Eicosapentaenoic Acid a type of Omega 3 fatty acid.  The higher the AA/EPA ratio the greater the level of inflammation in the body.  AA is essential for the brain, liver and organs but in excess it has been linked to inflammation.  EPA has anti-inflammatory benefits and has been used to reduce infections, improve healing and recovery.

Interleukin (IL)-6: IL-6 is produced at inflammation sites and plays a role in the production  of acute phase proteins.  In addition to this it has stimulatory effects on immune cells like T and B cells.

Tumor Necrosis Factor-alpha (TNF-a):  a cell signaling protein involved with systemic inflammation.  TNF-a is a central regulator of the inflammatory process whose primary role is regulation of immune cells. 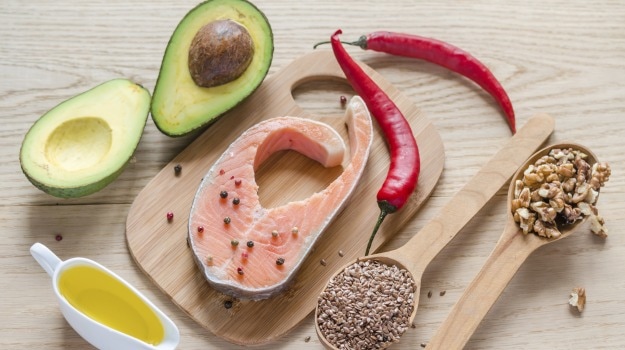 Balance Your Omega 6/Omega 3 Ratio: Omega 3 & 6 are essential fatty acids that have anti-inflammatory and inflammatory properties respectively.  Some research suggests that humans began eating a diet that had a ratio of 1:1 but modern western diets have skewed that ratio to an of average of 16:1.  Clinical research has shown that reducing the ratio has suppressed inflammation in patients.  A 5:1 ratio had beneficial effects on asthma patients, a 4:1 ratio was associated with a 70% decrease in total mortality, a 3:1 ratio suppressed inflammation in patients with arthritis, a 2.5:1 ratio reduced rectal cell proliferation in colorectal cancer patients.[1]

Eat More Fiber (fermentable and non-fermentable): Fiber has been shown to have anti-inflammatory benefits in two ways.  High fiber diets have been linked to lower caloric consumption and as a result body weight-related anti-inflammatory activity by reliving one of obesity induced chronic inflammation, this is evidenced by reduced amounts of inflammatory biomarkers in studies.  Fiber has also been shown to have local and systemic anti-inflammatory activities especially pertaining to the gastrointestinal tract.  In a study of 524 subjects averaging 16 g/d of dietary fiber there was an inverse associated between intake of total dietary fiber and C-reactive protein (CRP) suggesting fiber is protective against high CRP.[2]  A separate observational study using data from 1,958 postmenopausal women found supporting data that a high fiber diet was associated with lower plasma levels of inflammatory biomarkers like interleukin 6 (IL-6).[3]  High fiber diets were shown to trigger microorganisms in the gut that produce short chain fatty acids which  help reduce inflammation.[4]  Typically fermentable fibers are the fibers associated with promoting the production of short chain fatty acids.

Add More Antioxidants To Your Diet:

Antioxidants inhibit oxidation, these compounds are made naturally in the body and found in food as well.  Oxidants play a role in the pathogenesis of disorders like inflammation.  As a result of oxidative stress, many mediators can initiate and amplify the inflammatory response.  Oxidative metabolites have a potential to injure cells and tissue directly through oxidative degradation.  Antioxidants scavenge against these free radicals and inhibit their activity.  In the case of an antioxidant like Curcuma longa(found in turmeric) it’s been shown to inhibit cyclooxygenase-2 (COX-2), lipooxygenase (LOX) and inducible nitric oxide synthase (iNOS).[5]  A study on Cat’s Claw an ingredient popular in traditional Peruvian medicine was shown to be a potent radical scavenger especially against the free radical diphenlypircrylhadrzyl as well as having protective effects on the lipid membrane against perioxidation.[6]  As such, antioxidants are able to protect against inflammation by suppressing pro-inflammatory cellular pathways.

Consultations can be done over the phone, or in person. To set up an appointment email Ergogenic Health at [email protected].